A new campaign ad focusing on the impact of trade deals in North Carolina. “While his opponent has flip-flopped on trade deals, Bernie has fought them and stood with American workers,” the narrator says in the spot.

The other ad, which will air in Illinois focuses on NAFTA, an agreement supported by Secretary Clinton. “Only one candidate for president has opposed every disastrous deal: Bernie Sanders,” the narrator says.

The two ads will air in Illinois and North Carolina ahead of the states’ primary elections on Tuesday. 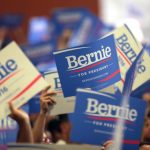