Under the plan announced by the White House on Wednesday, student debts of up to $10,000 will be reduced for working class Americans and up to $20,000 for Pell Grant recipients.

It is expected 43 million Americans will benefit from a reduction in their student loans, with 20 million to see their student debt eliminated entirely.

In a statement released later on Wednesday, Senator Sanders said the president’s decision would “reduce the outrageous level of student debt” in the United States.

“The result of this decision is that millions of Americans will now be in a better position to start families, or buy the homes and cars they have long needed.”

Sanders also acknowledged that there was more work to be done in making education more accessible.

“At a time of massive income and wealth inequality, education, from pre-school through graduate school, must be a fundamental right for all, not a privilege for the wealthy few,” the independent said in the statement.

“If the United States is going to effectively compete in the global economy we need the best educated workforce in the world, and that means making public colleges and universities tuition free as many other major countries currently do – and that includes trade schools and minority-serving institutions as well.”

The White House says details on how to claim relief will be available to borrowers in the coming weeks. More information can be found at studentaid.gov. 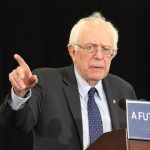