Presidential candidate Bernie Sanders will begin airing a brand new television advertisement in Iowa this week, just days ahead of the state’s caucuses.

Sanders’ new issues-focused ad, dubbed American Horizon, will hit the airwaves in the Hawkeye State on Tuesday, less than one week before Iowans head to caucus.

“There are those who say we cannot defeat a corrupt political system and fix a rigged economy,” Sanders says in the new spot.

“But I believe we need to lift our vision above the obstacles in place – and look to the American horizon.”

The new spot follows a wildly popular campaign ad from the Sanders camp which went viral earlier this week. At the time of writing, America had roughly 2.5 million views on Youtube. 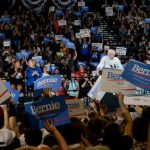