“I welcome Mr. Trump to Vermont,” Sanders said. “I hope his presence here will help him better understand Vermont values – social and economic justice, tolerance, respect for all people and the environment.”

“Donald Trump has been attacking Bernie for weeks now, and we expect more of the same tonight. There’s a reason he’s coming to Burlington. Trump wants people to think that in our hometown, he has more support than us,” said Jeff Weaver, Sanders’ campaign manager.

Senator Sanders’ campaign is using Trump’s visit to Burlington as a fundraising opportunity, asking supporters to contribute to send a message to Donald Trump that ‘our political revolution will best blustering billionaires any day of the week.’

“So I just reserved two tickets for Donald Trump to speak in Burlington, Vermont, the adopted home of Bernie Sanders,” one individual wrote on Facebook .”No, I have not converted to a racist bigot; I am just assuring that there are now going to be two empty seats.”

It will be interesting to see what happens tonight in Burlington. Trump’s rally is supposed to kick off at 7pm local time.

If there’s anything good to come of this event, it’s that it is giving Bernie Sanders a whole lot of media coverage. 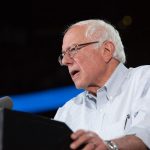