Presidential candidate Bernie Sanders is within arms-reach of the lead in Wisconsin, according to a Marquette Law School poll.

The poll, released Thursday, shows that Hillary Clinton is the favorite among half of all Democrats in Wisconsin. Meanwhile, Sanders trails her by just 9 points, the favorite of 41 per cent of registered Democratic voters.

In September, Sanders was trailing clinton by 12 points in Wisconsin.

However, more telling were the general election matchup polls that were conducted, which showed that Ben Carson and Marco Rubio would both defeat Hillary Clinton in Wisconsin. Clinton would beat Trump by ten points.

Meanwhile, Bernie Sanders would beat all three of the leading Republican candidates. The poll showed he would defeat Carson by six points, Rubio by four points and Trump by 17 points.

You can view the full results of the poll on Marquette’s polling website. 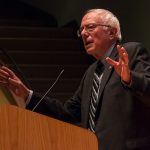