Bernie Sanders received a $2700 campaign contribution from that pharma CEO. Instead of keeping it, he donated it to a community health center.

Everyone knows who Martin Shkreli is. He’s the face of price-gouging drug companies in the United States, and he made a contribution to Bernie Sanders’ presidential campaign in an attempt to get a meeting.

But Senator Sanders isn’t interested in Shkreli’s money, or holding a meeting. Instead, the campaign will donate the $2700 to Whitman-Walker, a health clinic that specializes in HIV/AIDS care and lesbian, gay bisexual and transgender care.

A spokesman for the Sanders campaign, Michael Briggs confirmed that they would not be keeping the money.

“We are not keeping the money from this poster boy for drug company greed,” Briggs said. 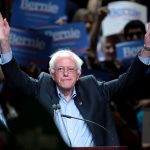