With just two sleeps until the Iowa caucuses on Monday night, Bernie Sanders has drawn the largest crowd in the state at his final rally in Cedar Rapids.

ABC News reporter Adam Kelsey tweeted the crowd was “easily the biggest crowd since Queens back in October.” Sanders’ campaign said in a statement following the rally that it was the “largest rally any presidential candidate has held in Iowa” this cycle.

Adam Edelman, also of ABC, noted that while other candidates are speaking to high school and college gyms, Sanders tonight has filled the US Cellular Arena. “It has the feel of a big party,” he tweeted.

Sanders campaign national co-chair Nina Turner delivered a powerful and emotional address, firing up the enthusiastic crowd. “Senator Bernard Sanders may be 78 years old, but we about to make him 46,” Turner said to rapturous applause.

“We have never had an event, where we brought out 3,000 people,” Bernie Sanders told the crowd, after being introduced by his wife, Jane Sanders.

“No matter what your politics may be, I think all of us understand that we cannot continue having a president who is a pathological liar, who has told thousands and thousands of lies.”

“We are the campaign that is going to bring about the largest voter turnout in American history,” Sanders said.

Indie rock band Vampire Weekend performed at the rally after earlier playing an acoustic set at a coffee shop meeting in Des Moines.

Sanders will join four public events in the Hawkeye State on Sunday ahead of Monday night’s caucuses.

“Our campaign has officially held the three largest rallies in Iowa. We’ve knocked over half a million doors in the last month,” said Bernie 2020 Iowa State Director Misty Rebik.

“This is what we mean by ‘Not Me, Us.’ Our supporters and our volunteers are what drive this campaign and together we’re going to work as hard as we can to expand the electorate and bring more people than ever into the political process.” 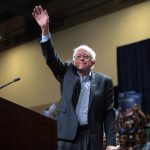 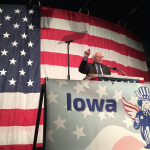