The legislation would eliminate tuition and fees at four-year public colleges and universities for families earning up to $125,000 per year, around 80 percent of the population. It would also make community college tuition and fee free for all.

“Higher education in America should be a right for all, not a privilege for the few,” Senator Sanders said on Monday.

“If we are to succeed in a highly competitive global economy and have the best-educated workforce in the world, public colleges and universities must become tuition-free for working families and we must substantially reduce student debt.”

The bill would also provide relief to students with mounting student loans by cutting interest rates for new borrowers in half, enable existing borrowers to refinance their loans based on new rates, and prevent the federal government from profiting off student loans.

Among the bill’s sponsors are Senators Elizabeth Warren, Kamala Harris and Richard Blumenthal, and Representatives Keith Ellison and Raúl Grivalja.

The estimated $600 billion cost of the bill would be paid for by a separate bill to tax Wall Street speculation. More than one thousand economists have endorsed the tax. 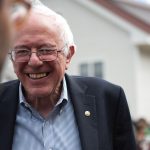