Democratic presidential candidate Bernie Sanders will appear on the Ellen DeGeneres Show this month, according to a promo.

An October show promotion for Ellen teased that Senator Bernie Sanders would be a guest on the show.

This comes after Hillary Clinton made an appearance on the show in early September. Clinton is a personal friend of DeGeneres.

Sanders supporters have been petitioning Ellen DeGeneres to have the independent Senator from Vermont on her show for months. 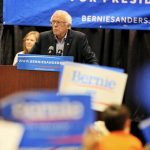